Mark yelled rattling on our iron gate, unlocking the padlock and chain at the same time, making it impossible for me to ignore the 5.30am early morning wake up call. As  I scrambled up from James’ and mine makeshift bed on the floor which we methodically pack up everyday, I shook the sleep and fuzz out of my brain.

If it was not important Mark would not have come!

I knew it I had to move no questions asked…..yet!

Working in Baseco has it’s moments and I knew this was  one as I  kept shaking my sleepy head to make it clear knowing I would need all of my faculties to be alert and happening. A baby born again in Baseco slums I thought, without a midwife or doctor (again) , it just came….as Mark filled me in on all of the details, scant as they were I kept my fears at bay. I raced into our tiny bathroom that doubled as a shower and laundry and threw on yesterdays clothes……I knew what could happen and what may be happening but kept pessimism (and medical mind) out and faith in. I had too. I immediately began to pray in tongues claiming life and thanking God for this life.

As we raced out the door, leaving James in a bemused fuzziness, I grabbed my bag and money and we raced out into the early morning light, Mark even turned the light off for James!

I knew it was really an emergency when Mark hailed a tricycle (motorbike with a side car) to go up the road, that takes about 8 min to walk, we never do that. The morning was quiet but people were bustling around as Baseco days start early……

Ignoring them we raced down to main road and I could hear Mark yelling directions at the driver on the outside, I was cocooned in the sidecar, we stopped near the High School I paid the driver and I followed as Mark raced through the houses and prepared me verbally for the scene ahead…………..the umbilical cord needed to be tied (now he tells me!!) so now I had to start thinking, looking desperately around for cord, twine or something (yes from the rubbish lying around-do not usually have an umbilical clamp in my handbag!!) that we could disinfect and use to no avail luckily you think. I thought “Well God will provide”….He did!

We wove through the slums for what seemed an eternity of unfamiliar houses  to me….. funny how diversion and adrenalin can alter reality, in fact it was a path we had traversed many times just behind Prayer House, but I had NO idea where I was. I walked out later and discovered where we actually were I was amazed at how close we were to “home”.

We were greeted and welcomed by neighbours as they made way for us as if we were the Knighted Cavalry…..well we were on a mission!!

The house from the outside was a poor one, even to my untrained eyes I knew…… 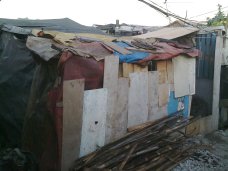 The front of Istine’s house a hotchpotch of plastic, tin and wood!! 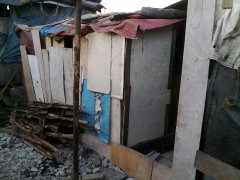 The front door, only up to my shoulders!!

The roof was so low even Mark had to crouch, I squeezed in and there they lay.

In the squalid kitchen dear “Istine” (her real name is Christine but nickname “Istine” ) had delivered a baby boy…..she was familiar to me as she faithfully attended all of my Birthing Classes…..I guess we were the first port of call in distress. She had attempted to transfer to hospital but got outside and felt the baby coming so reversed back and just HAD the baby in the kitchen……..probably the most dirtiest part of the house but OH WELL when you gotta birth it just happens!!!!!

Amongst the ashes and dirt floor in a grubby sheet lay the baby and the mother…..look closely at the floor, remember what conditions your babies were born in! What a contrast!

A neighbour had raced to get Pst Annie and Annie raced to Prayer House and tapped (hmmmmm she said knocked) but Mark swears she tapped on the door asking for a First Aide Kit……then in the dark they raced off together to the house where the baby had been born and the placenta was on the way. After Mark made sure Annie was ok he came for me……so really God had already birthed the baby we just cleaned them up.

Pst Annie and I hard at work…focused

Baby was breathing, a little snuffly but ok,  the airways were clean, he was responsive……..AGPAR scores were applicable (except heartbeat) but in the next 10 min we watched him become more alert and his colour change….all the time I am telling Annie what I am doing…what to watch for the signs of distress etc.

Checked over and still had cord attached (cord no longer pulsing either) Note the candle! No electricity either just one sweet candle!! Hee hee and we use candles for ambiance! 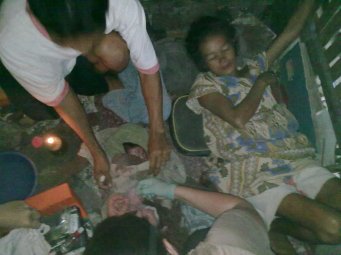 Annie and I tying the cord, with Istine watching by candlelight!

Someone (God Bless em!!) found us cotton and Annie disinfected it diligently, doubled and tripled it over and we began to tie the cord. (the placenta had been born so there was no imminent bleeding danger so it was not rushed either) we tied it on two sides and I got Annie to cut the cord so she could feel the tough blood vessels and slippery covering for herself (no good me doing it…….she needs the experience so that if she ever faces it again she can do it without panic)….what a blessing we did it. I checked Istine for bleeding, we washed the baby and Muma a little and they were ready for the first breastfeed.

Moving Istine and then unamed Josiah to the wooden floor (that was scary that floor could hardly take my weight it was so rickety- no fat jokes ANYONE!!)

Not as quickly as I would have liked but HEY it was our first time, and considering our circumstances!!!!! He fed and sniffed and all was happy!

The baby was great, Istine was fine, Annie had done it basically alone I was only moral support!! 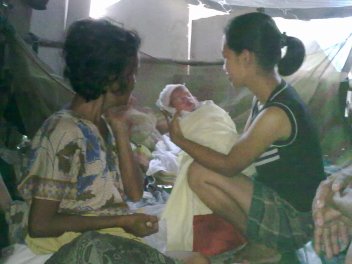 Oh and Mark procured buns and coffee for Istine from somewhere

We raised money to build a new house for the family WHAT A CHRISTMAS!! They received a Christmas Food Hamper and more!!

So that is my Christmas story about a Christmas baby born in humble home with humble birth attendants.

The miracle of birth never ceases to amaze me!

Same feeling and  atmosphere  in the sanitized room or slum kitchen

Holy awe……electric with life and hope

Every new born baby is God’s opinion that the world should go on.

The buzz and high of birth in all circumstances!! Poor or rich!

In the glorious “after baby glow” that shone through the dirt and grime of this humble home, I asked Istine what was the baby’s name, she told me she did not know yet………not thinking and just being comfy I said “Ohhhh that is ok with one of my babies it took me a week to name him Josiah”……..she sat up and smiled at me and rattled something in Tagalog…everyone oooooohhhhhhedddd and aaaaahhhhheddddd and they told me that she had called him “JOSIAH” how cute is that!!!!!!!!!!!!! A legacy in Baseco!!!

A good ending to this story!

But on a serious note…..

One story with a happy ending can in reality mask many stories that do not have happy endings….I personally was involved with two babies and newborn’s dying in the short time I was there……………….SO stay tuned for my ideas of how to be a REAL help in this harsh birthing world……………….It is good to DO something!!!